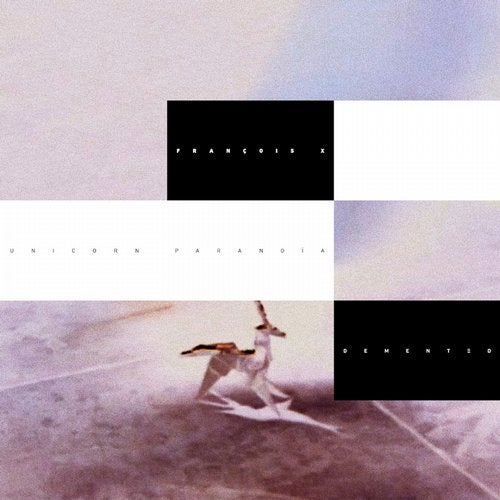 Two years after his latest solo appearance on DEMENT3D, Francois X, also co-founder of the label, reveals his new EP Unicorn Paranoia. A record that sounds slightly more intimate indeed, after a period marked by close collaborations, especially with Opuswerk (Hiss:1292) and Antigone (We Move As One). The active listener will surely notice a shift in Francois's musical approach, the tribal shamanism, once his prevailing credo, has ceded the lead to a somewhat subtler blend of influences.The hypnotic affinity, inevitably one of the prepon- derant aspect in Francois's previous material has combined with his strong house and industrial influences. Inspired by film directors he admires, Francois X immerses the listener in a distinct moment of intimacy, both cinematic and captivating, with a very personal vision of the Club and Dance Music as a keystone. Let's give him the floor for just a few words: Unicorn Paranoia was inspired by a kind of mental utopia that I have of the Club and the electronic music movement as a whole. What I'm trying to transcribe through those few tracks is a daydream that appears to me once in a while, of a New-York City street in the twilight of a starry night. This picture is for me an incarnation of these moments of escape, that I lived many times after every night where this idealized House and Techno movement got me dreaming. It's that particular fantasy at work on the track Vivid Dreams, for instance. The music coming out of that record is without a doubt techno with raw character. Nevertheless, there is a subtler and more delicate aspect to it that reflects one of the angles of what I feel is my approach to music. My DJ sets, for example, tend to aim at length and progression rather than instantaneous efficiency. I apply myself to bring about contemplation and reverie, those fleeting moments when 'the magic' briefly performs. Persistence Hunting and Unicorn Paranoia are a perfect realization of that illusion: the lengthy progression should guide the listener towards an inexplicable frenzy. A fictitious or real one ? Hence the Unicorn, this mythical animal, visiting many an ephemeral dream sequence. Here, I intended to make a reference to several things: to the movie Blade Runner for instance, where dreams are an essential part of the intrigue, as they help determine the human or robotic nature of each character. Deckard dreams of the chimera many times, together with the movie's enigma, rely on a unicorn-shaped origami. Dreams and Utopia have had a central role in this record's composition. The Dream, this ultimate pleasure indulged by music, by the passion dedicated to it; and the Utopia (this of the club), which makes us continuously endure nostalgia, sadness, and sometimes even bitterness in that perpetual quest toward an experience that may be found only in The Very First Time.