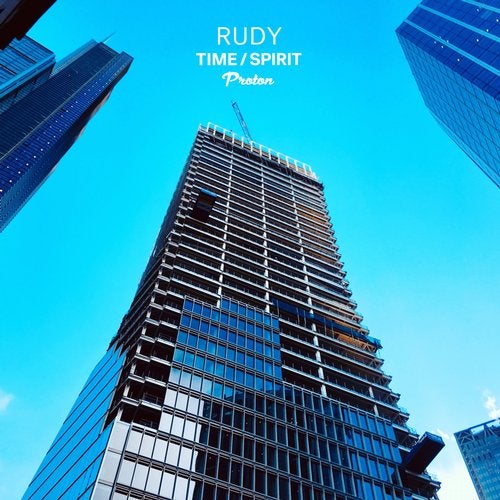 As the New Year opens its doors on 2018, full of hope and promise, Proton Music uncovers another gem from the jewel-encrusted rock face of underground dance music. A beautifully polished sound now sees newcomer, Rudy, sparkle and shine with his "Time / Spirit" EP.

An artist who made an instant splash with his debut release on Subjekt Recordings, Brighton based producer, Rudy Dubé, scored an instant hit from his base on the English south coast with "Transformation". Released with remixes from fellow south coast resident and global star, Kris Davis, alongside Berlin based icon, Martin Roth, Rudy hit the ground at quite a pace in mid-2016.

Going on to release "Monday" on Chouette Music in late-2016, the "Qualia" EP for Los Angeles based imprint, Oleeva Records in May 2017 showcased Dubé's penchat for Deep House as the track lit up the scene, also appearing on James Warren's "Visceral" compilation series. With his flair for blending rhythm and melody in exciting and innovative fashion, a further remix for Nie Wieder Schlafen saw a sublime interpretation of Quatri's "Ozora" that hit the number one spot in "Proton Pack 149". A subsequent debut on Proton Music then saw Rudy taking on David Calo's techno monster, "Chronomatic" in December 2017.

Now Rudy returns to the label with a wonderful triptych that epitomises his unique and compelling sound. Opener, "Sea Change" hypnotises with its strong kick backbone and evolving arpeggio line that shimmers in delayed glory. A whispering hi-hat shuffle emerges at the mid-point while a rich sub-bass fills the low-end and rasping analogue bass stab commanding attention with its Moog-like characteristics. A beautiful organ interlude sees creates an intelligent pause in proceedings before arps and rhythm combine once more in the final movement.

The strong rhythmic qualities of its predecessor are fully to the fore in "Time" as a complex percussive cadence supplies the framework for a collage of sublime melodies and chord progressions to float effortlessly across a seven-minute voyage. Contemplative in tone, the track title is well-suited to the musical narrative held within. Capped by a trademark warm, rasping bassline. Rudy's skill and craft is in full evidence.

The final offering sees, "Spirit" take centre-stage with its elegant and free-flowing melodies and storming bass line. Fully reminiscent of the Moog-inspired work of Stephan Bodzin's "Powers of Ten", the beautifully crafted bass-lead supplies an astounding work that could have been crafted by the legend himself. The soaring strings and chord progressions add further depth and texture as a driving beat and triplet shakers create a genuine sense of dynamism.

Firmly on the underground map with his stunning brand of music, Rudy has the "Time" and "Spirt" to succeed at the very highest level.