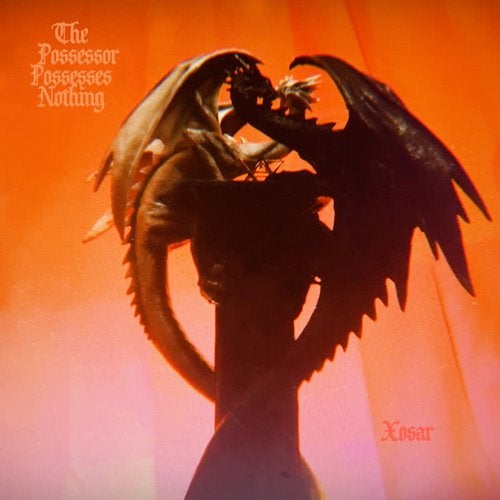 In The Possessor Possesses Nothing Xosar tells the story of a tonal mutation. A montage of attractions. A straddled comment on organ systems. This album is a play. Broken chords suffocate in waves and get back on the scene.
Trying to control the world?
I see you won't succeed.
T'ien hsia shen ch'i
The world is a spiritual vessel
And cannot be controlled.
Those who control, fail.
Those who grasp, lose.
Some go forth, some are led,
Some weep, some blow flutes,
Some become strong, some superfluous,
Some oppress, some are destroyed.
Therefore the Sage
Casts off extremes,
Casts off excess,
Casts off extravagance.
Xosar cites the above passage from the Dao as a key point of inspiration for her new album The Possessor Possesses Nothing and it's a more than apt bit of poetic philosophy given that her album is about one girl's quest to liberate herself from oppressive forces.
The making of the record was for her an "exercise in decisiveness, action and liberation." This is music making in part as self-therapy - with Xosar cleansing herself "from my own fears" and embracing "self-acceptance, self-trust, responsibility for oneself." But the music was also created under a state of "optimistic nihilism" aimed directly at "anti-perfectionism, anti-elitism, anti-censorship and anti-fear based programming." Xosar aiming not only to liberate herself and her creative process from restraints internal but her listeners from external restraints too. It's telling then that she found herself experiencing "the feeling of being a kid again and allowing pure expression to flow."
These are heady and brave ideals - part of a long series of varied investigations Xosar has been putting herself through not only as a musician but simply in life. She draws from research into the ideas of Alchemy, Magick, Kundalini Yoga, Fractals, DNA Structure, the Golden Ratio, Biofeedback, Quasicrystals, Visualizing higher dimensions, The Human Energy Field, Psychedelic Medicine, Stand Up Comedy, Sound Healing and much more. Hardly your everyday Techno producer then. And "The Possessor Possesses Nothing" somehow takes all these ongoing themes and turns them into a whole. Clear you mind, open your ears wide and prepare for a wild trip ahead.

The Possessor Possesses Nothing