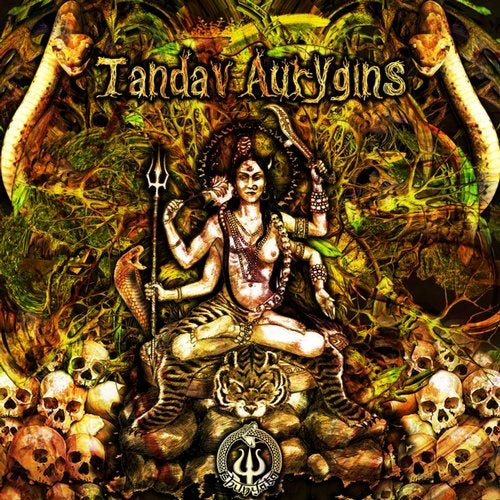 Shunyata Records is proud to present their second full length Various Artists Album featuring talented artists from all around the world. Worldwide release through Shunyata Records bandcamp. Album Concept Shiva is believed to assume two states - the samadhi (Superconscious) state and the tandav or lasya dance state. The samadhi state is His nirgun (Non-materialised) and tandav or lasya dance state is His sagun (Materialised) state. Body movements performed to depict a particular event or issue is known as natya. The one who performs this natya is a nat (Actor). Traditionally, it is believed that Nataraj is the keeper of the dance. Since Shiva is the pioneer amongst actors, the title of Nataraj is accorded to Him. The universe is His dance. Just as He is the dancer, He is its observer too. Nataraj plays the role of bringing about activity in the universe through the commencement of His dance and merging the visible and invisible Creation into Himself when He stops it. Thereafter, He remains silent and alone, engrossed in absolute Bliss. In short, Nataraj is the manifest form of all activity of The Creator. Nataraj's dance is considered to represent the five actions of The Creator, namely Creation, Sustenance, Dissolution, the covering of the Great Illusion and initiation (The Creator's grace to get liberated from the Great Illusion). The Creator dances.. dances to create.. to sustain.. to destroy.. & in all three he needs a twist of duality.. The Creator creats duality with its illusion power.. Its all the part of Great Leela.. The Leela of Samsara.. When Shiva first began His ananda tandava, his dance of bliss, in Chidambaram, Kali got filled with pride and challenged the Lord Of Dance to a dance contest. Shiva Nataraja wished to eliminate her arrogance so he laid down the following terms: whoever won would become Lord of Tillai (Land Of The Undead); whoever lost had to leave his or her shrine. While the demi gods and sages watched, Kali and Shiva began to dance. When Shiva performed a difficult manoeuvre called urdhva tandava (Also a classic pose on Udhva Yoga School) - one leg thrust vertically towards the sky - Kali conceded defeat because she was unable to execute that particular step. This play is different; it's in the rhythm of bharata natya. In the grace and the movement of the body. The Urdhva tandava is a form of expression, one that is matched only by Kali when she dances alongside Lord Shiva. It's a different kind of mano laya (mind rythm), where this energetic Goddess redefines every step of grace and beauty. Where chemistry is a result of a power game at a superior level, where the drums resound into the air, followed by the rhythmic sounds of ghunguru (Anclet) as two feet merge into a single united sound of higher bliss. Where energy flows unlimited in the expression of abhinaya (act of expressions), when there is passion in the air, where there is mischief in the eyes as the Goddess challenges the Lord to His every step in dance! VA Tandav Aurigyns has powerful music from artists around the world, Once again coming together to create a blissful journey. VA aims to thrill the dancefloors all around the world. Each artist has expressed the Tandava Origins in their own unique way.