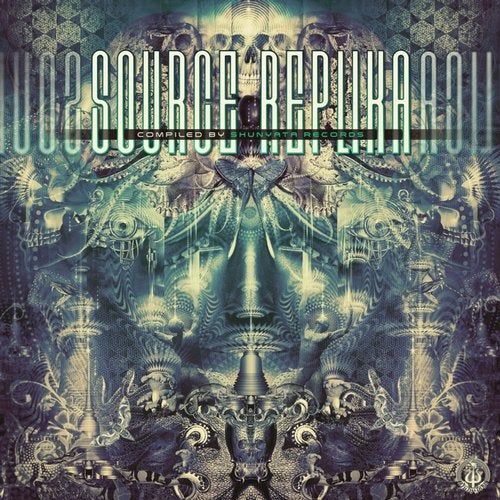 Shunyata Records believes that through Idea, musicality, inventiveness, and sheer conviction it is possible to attain musical consciousness which is much needed right now in the world, with that in the mind we as label and our artists as music producers continue to invent ways to push the envelope and inject an artist personality into the psychedelic trance genre & saying that we are delighted and happy to announce the release of long awaited VA Source Replika. This VA is Thunderously heavy and rigorously artistic, We would like to say thanks to all the artists who have been involved with Shunyata Records and its mission of always chasing the fresh, free and experimental sound of psychedelia. Thanks very much, we couldn't have done it without you. Because all the artists brought in their personal touch to the story this Various Artists Album stands unique for fusing the technique with the concept. Massive thanks for an amazing artwork by Aashit Singh and a massive thanks to Skyhighatrist for yet another clean and clear audio mastering. ★ Album concept ★ Universes are separated from each other by a single quantum event. A theory of a self-contained separate reality co-existing with one's own. A specific group of parallel universes is called a 'multiverse', although this term can also be used to describe the possible parallel universes that constitute reality. While the terms 'parallel universe' and 'alternative reality' are generally synonymous. There is sometimes an additional connotation implied with the term 'alternative reality' that implies that the reality is a variant of our own. The term 'parallel universe' is more general, without any connotations implying a relationship, or lack of relationship, with our own universe. A universe where the very laws of nature are different - for example, one in which there are no Laws of Motion - would in general count as a parallel universe but not an alternative reality and a concept between both fantasy world and earth. Each and every track is mindly crafted by keeping the core of the concept of the VA in the subconscious and at the same time maintaining the flow & importance of the subliminal messages encoded within! Please show some support by buying the original music!