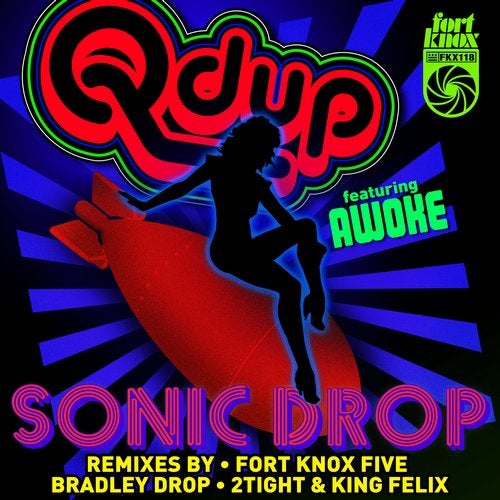 Qdup is back for summer and his booty-shaking 808 laced hip-hop breaks monster Sonic Drop ft Awoke has been remixed into three different directions, all of them destined to rock the dancefloor. The original version, with San Francisco b-girl Awoke's fresh lyrics, has been doing damage all spring and now Qdup has enlisted some good friends to reinterpret his party anthem. The results are just as funkin' delicious as you might imagine, Sonic Drop has truly been taken to the next level with these three remixes.

Label bosses Fort Knox Five slowed the tempo and dropped their signature electronic meets live instrumentation sound. Rob Myers, who also plays with Thievery Corporation added some funky guitars to this stellar remix. Awokes party flow shines over the funk grooves as the bass and beats drive you straight to the dancefloor. Its a funky party over here; now push it!

You may know Bradley Drop from his heavy presence in the Beatport Top 10 Breaks charts over the last year. Another Washington DC area music producer, Bradley Drop makes his debut appearance on Fort Knox Recordings with this remix. He pushed up the rave level and turned up the breaks pressure to 11, this breaks gem will fire up any crowd!

2Tight and King Felix are staples in the Los Angeles underground DJ scene. They flex their DJ sensibilities and take Sonic Drop into the four to the floor arena with their Warehouse Nitrous Refix. Their Future House meets Bass House treatment sounds like something pumping out of a DTLA warehouse. Turn on the smoke machine, drop the bass and get ready to boogie!.

Qdup has been hard at work in the studio and has put together a great release with three solid remixes. From mid-tempo party rocking to uptempo breaks and future house; this remix package has a little something to cover all your dance floor needs. All three remixes are also available as instrumentals.