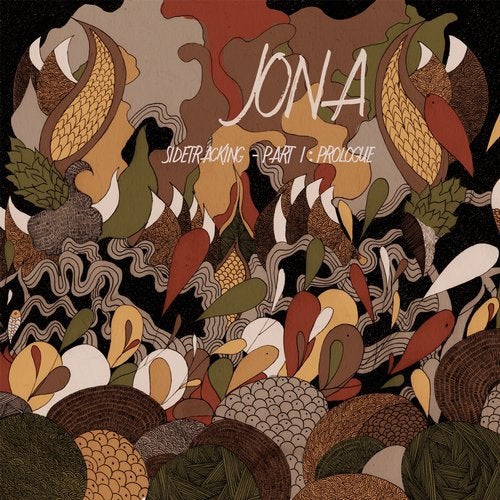 Sidetracking - Part 1: Prologue is the frst vinyl taste of Jonas de-but album project for Alex Niggemanns forward-thinking AEON label. The musical puzzle will be completed in February 2016 with the release of a second vinyl instalment, featuring 6 more original tracks, and the full 10-track album on CD format.

Created over the course of two highly creative years, the concept for Sidetracking was for Jona to invite some of his musician and producer friends to collaborate with him in the studio and compliment his albums solo productions. This impressive coming together (to be fully revealed over the coming months) features Varoslav (Rue de Plaisance, Paris), Usio (Studio Barnhus), David K (Cocoon), Bolivian percussionist Daniel Aguilar, Italian pianist Giovanni Verga, and Edinburgh-based producer The Reverse Engineer.

Driven by his desire to explore new sound perspectives and ideas, Jona has carefully forged his career path by consistently creating exciting and forward-thinking music. His previous label outings: Traffc on Lost Tapes Volume 1 (AEON010) and Gemini EP (AEON016) have seen him fne-tune his own unique sound. By incorporating a wide range of styles into his tracks, Jona strives to break down unnecessary boundaries and explores new ideas and ways to ignite that hallowed dancefoor fame. It is therefore no wonder that his collaborative creations for Sidetracking have yielded such stimulating aural delights.

Fittingly, the album prologue opens with a track whose style is heavily infuenced by the jazz music that Jona was so in love with during his formative years. Calling on the somewhat mysterious Usio (whose Kuwa Huru LP on Studio Barnhus should be checked by everyone) to join him in a studio jam, has resulted in The Chase, an utterly compelling afro-beat infuenced percussive groove, topped with swirling funk-fuelled stabs and strings, mesmerising chiming piano, and a large helping of pure, hip-swinging goodness.

Taking The Chase on an entirely different and yet perfectly complimentary twisted trip, AEON family members Simone Sinatti and Marco Paladin (aka Speaking Minds) conjure up a futuristic technoid disco demon that is all about throbbing energy, sweat, darkness and hissing smoke machines perfect ingredients for an unforgettable strobelight serenade.

Changing the mood entirely and cutting the tempo to a dublicious skank, Transmission Breakdown sees Jonas experimental creative juices in full fow, as he teams up with Edinburgh-based digital composer and sound artist Dave House (aka The Reverse Engineer) for a delightfully hazy downtempo jam.

Both as an artist and a DJ, Manchesters Marcus Intalex has been at the forefront of soulful, musical drum & bass for what seems like forever. A passion for techno has always run deeply through his music and under his Trevino moniker he is also a powerful creative force (check his recent Front album to get the full picture). Here, he takes Transmission Breakdown on a magical excursion, flled with subtle, hypnotic, evolving energy, anchored with an irresistible pulsating bassline throb - a perfectly synergetic interpretation to round off Jonas Sidetracking album prologue in style