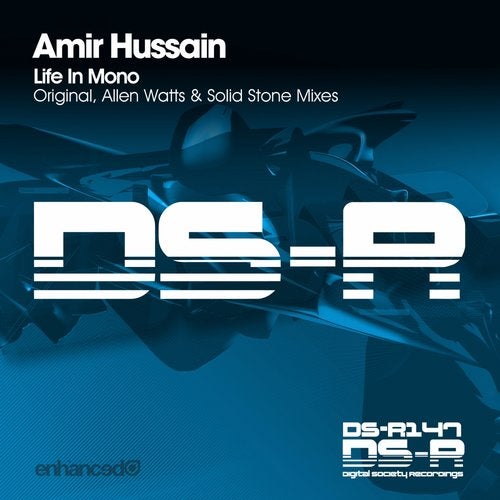 One of the UK's most prized assets within the Trance scene, Amir Hussain, returns to Digital Society Recordings with his latest smash, 'Life In Mono'.

Delivering yet another of his uniquely atmospheric productions, 'Life In Mono' sees Amir create a beautifully brooding, classic-tinged Trancer full of cosmic FX, flexing bass and his unmistakable energy. A true claim to praise after the huge 'Shaman' which saw extensive support from Trance's elite.

Completing the release is two remixes from Allen Watts & Solid Stone. Two names who need little introduction to Trance fans and who each inject their own styles into Amir's Original.

Allen Watts' effort brings the Dutch producer's established sound to the release, filling out basslines and eking out a more tech-influenced monster retaining the Original's elegant melody. Rounding off the release is the omnipresent Solid Stone who takes 'Life In Mono' through his beautifully diverse, moody style resulting in an amplified atmospheric journey, taking things down a notch to tie off the release perfectly.

Amir Hussain is back, supported by two equally impressive Trance producers, 'Life In Mono' stands out as one of 2015's best.