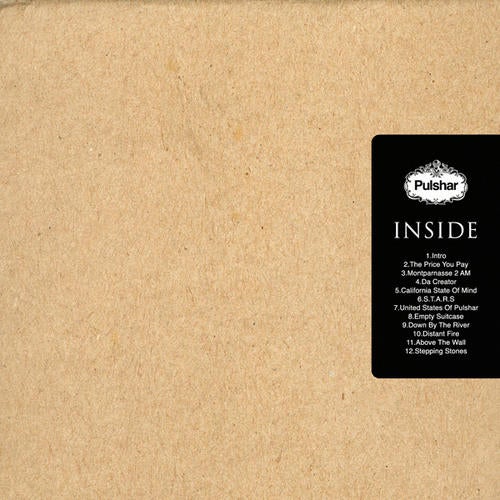 Pulshar are emerging as true musical heavyweights, with compositions that traverse the borderlands between spacious songcraft and the futuristic outer-reaches of the dub-techno universe. Desolat is proud to present Pulshar's latest longplayer offering.
After receiving widespread critical acclaim for his various solo projects and remixes in 2009, the Inside LP sees Pablo Bolivar reunited with the tender tenor tones of Aphro for their much-loved Pulshar project.

On tracks like Da Creator and Montparnasse 2am, an easy house groove takes its time rolling out languidly, while mild melancholia, sample stabs and outer-space delays hark back to the heyday of On-U: a synthetic interpretation of King Tubby's legacy that would sparkle in the early hours at a tech-house beach party. Montparnasse 2am incorporates eerie soundtrack fragments that explicate the duo's love of classic cinema, and the penultimate track, Above the Wall, provides another filmic fragment: with surf guitar twangs atop a blissful doo-wop haze.

A little magic goes a long way, and the blood light shines bright on some of the more pop-filtered tunes, such as the whistling nuance of United States of Pulshar. With its plaintive, optimistic melody repeated like a hip hop sample, and burbling synth touches: it could stand as a manifesto for the project. California State of Mind lassoes elements of today's West Coast beats scene and the synth funk that preceded it, adding a tuneful dubby touch and letting everything melt together at leisure, while S.T.A.R.S. and Distant Fire incorporate post-garage patterns and weighty bass, showing the full arc of dub's development.

The two pay respect to their dub forefathers in a more literal manner on cleanly polished gems like Empty Suitcase and Stepping Stones, a collaboration between Pulshar and Roberto Sanchez, who is a leading figure in the European roots reggae scene. Pulshar encompass the world of reggae influences and incorporate everything in their own distinctive, forward-looking style. Take a load off!