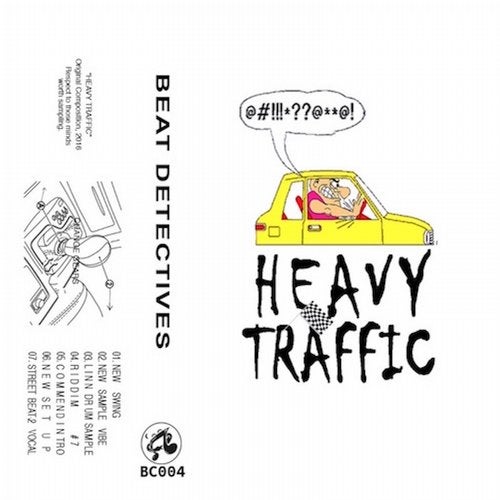 What is music? Is it some warped set or a never before heard radio station, or two televisions being broadcast and received simultaneously? Beat Detectives 'Heavy Traffic' album is a composition that deals with ideas of cut and paste, duration, loose comedy, sharing, like shuffling through cards or flipping through folders. The original seed of the composition was a selection of recordings more or less randomly tracked to tape in a series, along with many warped and fragmented rhythms from the 56 bog beat lab. Always an investigation, scattered to find a pattern or hook or groove or better a beat. What does a frustrated version of the world feel like? This is cartoon music. Is it? This is a rhythm. One headphone seems to be louder than the other but it might be the mix, the odd acoustics of the train platform or the reality of the situation is that your hearing is probably busted? Now the panning in the track is totally different anyway. U know? Thats the vibe. Burn it down. Don't argue with the wrong people. acab.love poetry, end hate. earth is for all people. the tracks should speak for themselves. Nefertiti Heavy Abstract Traffic Movie re: Nerfertiti Abstract Movie connection. This album is half of a pair. As far as promotionally - Nefertiti will drop a few months down the line - no need to rush - no time to waste. beat detectives / beat concern / 2017