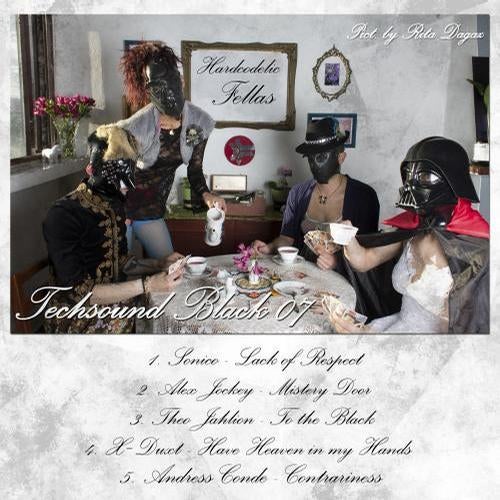 The Hardcodelic Fellas- features 5 banging hard tracks from 5 of the most representative producers in Colombia at Techsound's darker series, The Black Series. Sonico's track reflects a long time exploring into music, blending it with activism and creating a unique sound free of tags wich speaks for itself! Alex Jockey, Colombian Techno rising talent also part of Aktivists Recs, shows us his darker side on this track constructed specially for TS Black! A proper dancefloor killer. Theo JahLion, one of the most talented hard Techno producers in same country brings his second track on Techsound Black Series........bang it one more time!! X Duxt been involved on the hardstyle scene for a few years on labels like Phat Traxx Recordings, HarderStylerz Records & RB Forces Records........ now publishing his first track for TS Black...a blend of Hardcore with little taste of his hardstyle in in the mix. Andress Conde, the youngest hard techno talent also on Datablender records brings his sound with this first track for TSBlack............youth talks hard! The Colombian sound...what can we say?? Say nothing, just listen to it!