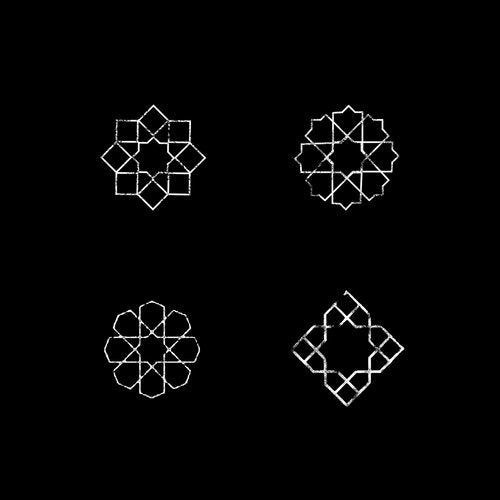 Wondering if, while untying a knot in a long rope, slowly untangling the rope from its own grip, the exact point where the knot ends and the rope begins can ever be determined, observing that the rope itself is a series of tangled strings that are a handful of woven cords of entwined strands of braided fibre of woven matter.

The same goes with the outward spiral of interlacing a series of "Girih" and putting together different pieces until eventually a pattern emerges. A pattern to which, one could keep on adding particles and details until it eventually becomes a complex, indecomposable system, a multi-layered design that has infinite detail yet is still a form that resembles the whole.

Experimental electronic musicians from Iran have marked their prints on the face of the universal experimental music scene for some time now, though the manner in which their status went from "non-existent" to "present" and from "silent" to "noisy" might somehow seem "unpredictable" to the naked eye. The way these small individual girihs have become conjoint in order to make a larger design, might at some point seem arbitrary and even accidental. Nevertheless, by following the patterns in which the branches of a river are spreading and by trailing all its curves and bends, we find a sense of order in chaos.

Now reaching the point where the scene transitions from symmetry to asymmetry -not only in relation with the outside world but also within itself- I wonder if we have been lucky enough to have reached our "Lyapunov Time". After all, isn't this transitional state of a chaotic system -this cryptic blend of order and disorder- the most productive path towards equilibrium?

This compilation is trying to transform the chapter from "individual" to "crowd", at the same time, still maintaining "independence". This inevitable spread of fractures, better not be tamed but explored, as us, musicians, are all exploring and experimenting while trying to keep our unique identities originated from our homeland, our experiences, our struggles and our principles.

In embracing the rain of "chaos" lies a power and a thrill no shelter of an umbrella can provide. However, somehow having a roof over one's head, under which, all can breathe the same air while still retaining all of their clashing ideas and their frictions, helps catalyse the emergence of -the so-crucial- "diversity" and in that sense, numerous more fruitful, well-tiled pathways towards experimentation and productivity; As extensive as geometry itself, as infinite as "fractals".