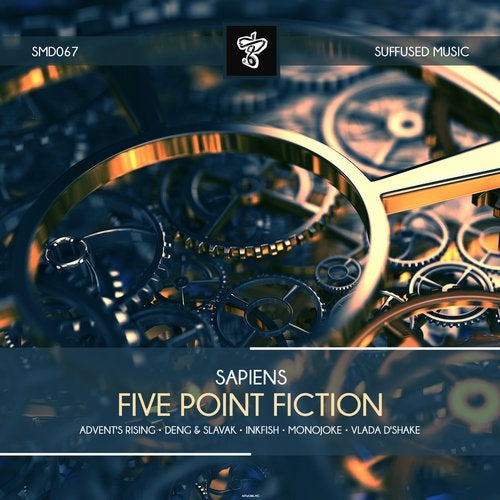 A catalogue of successful releases behind them from an ever-impressive roster of talent, Suffused Music sees Israeli artist, Sapiens, take up the production reins on their 67th release. Stepping sure-footedly into the limelight in 2012, the Tel Aviv resident has hit such well-regarded labels as Stellar Fountain, Baroque and Visceral in recent times before making his debut for the Suffused Music imprint with the chunky rhythms and retro bass line of "Five Point Fiction". Replete with Georgio Moroder styled synth lines and echoes of heyday Orbital, Sapiens' original mix is a cheerful journey to please the senses.

Suffused regular, Advent's Rising, features first on a four-pronged remix approach. Over a quarter-of-a-century of production credits with the Lithuanian based imprint tells its own story of Panos T's popularity, as does further work for the renowned OLD SQL. Taking audio cues from the original a bass line that extends the Italo-dance influence, it thus performs the driving backbone for a strong house rhythm to play in tandem while twinkling motifs shine atop to clever effect.

Russian pair, Deng and Slavak are next to ply their production talent on Sapiens work. From their home in the industrial city of Volgograd, the duo has hit the heights with Mistique, Massive Harmony and Morninglory with a music style focusing on "intricate progressive groove". Reworking "Five Point Fiction", Deng and Slavak provide a thumping, metronomic kick that anchors an intelligent percussive riff. Simultaneously, pads swathed in delay and atmosphere creates an ethereal atmosphere, capped by the languid vocal sample found in Sapiens' original.

Swedish outfit, Inkfish, need little introduction to the modern music scene. Over 500 production credits can be found against their legendary name with almost 300 on their own eponymously named label. Anjunadeep, Armada and Parquet are among a long list of high-profile imprints to feature the quartet's work but it is with the solo efforts of Mattias Lindblom that remix duties lie for the Inkfish interpretation of Sapiens. An impressive hallmark groove immediately finds its way onto "Five Point Fiction" while smooth melodies and loquacious vocal sample add rich layers of texture and interest to create an intelligent remix of high quality.

Polish legend, Monojoke, is the third artist to feature, with his "boundary pushing" music. A debut release on FeralCode in 2007 laid the foundations for a production career that has featured heavily on the successful Spring Tube and Particles imprints, providing Monojoke with a music career that has flourished. An artist much sought after for a distinctive style, his remix is a superlative combination of luscious soundscapes and rolling percussive groove combined with a smooth, deep bass line that brings a sure touch of class to Sapiens' original work.

Final contribution comes from Serbian star, Vlada D'Shake. Immersed in music from an early age, having finished music school, Vladimir took to expressing his passions through the medium of electronic music. A debut in 2011 provided an open door through which the Serbian burst forth with work then signed to Balkan Connection, Electronic Tree and LuPS records. Working his production magic on Sapiens, the Vlada D'Shake remix is a contemplative offering that builds effortlessly with twinkling keys and haunting leads matched exquisitely with a deep, metronomic beat and ticking percussion section. Using Sapiens' vocal samples in astute manner, the result is an impressive affair.