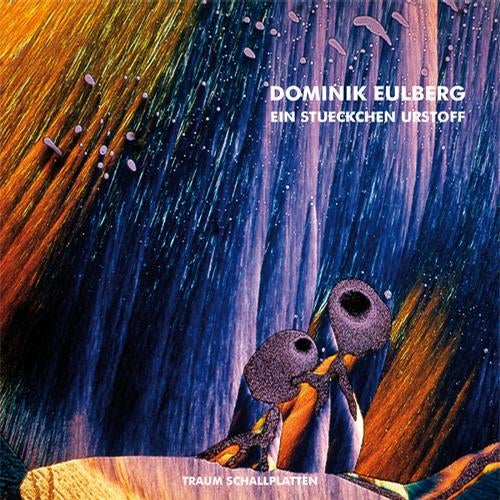 Its something you usually don't want to hear in a information sheet... that "this release is the best he has done so far", but we are quite sure "Ein Stueckchen Urstoff" is a phenomenal piece of techno and 100%% unique! Defying genres such as melodic techno, or manipulated music, glitch or whatever."Ein Stueckchen Urstoff" reflects on Dominik Eulbergs sound design he developed for his "Diorama" album, fused with much more hedonistic force, phantasy and tons of wit to go with it. The a-side "Offenbach" brings the "collective feel" in dance music to a new level. Parts of the percussions in his track are so slack they make you feel like being slapped in the face with a wet towel whereas others are even melancholic and some synth sounds are so euphoric and explosive you get carried away big time.Dominik creates these strange and bizarre sounds and soundscapes that evoke that childlike sense of wonder you feel when experiencing something for the first time. It is as if Dominik was inventing his own language speaking in an unpredictable tongue of spontaneity but with all the weirdness. What's really stunning is the fact that everyone who has heard the track, seems to celebrate it relentlessly."Offenbach" is an absolutely highlight and very DJ friendly as well. "Die Blaue Sekunde" is equally breathtaking and groundbreaking! Its beats are made out of exploding firecrackers and acoustic "rooms", they are huge and spacious as anything. The melodies rotate with brutality and hyper dynamics take place sucking in your energy like a tornado.Switching from one extreme to the next one as if both were brother and sisters, Dominik plunges into a pool of lush sounds in the break as if taking a bath in one of the Westerwaelder lakes Dominik lives close to. "Die Blaue Sekunde" is an emotional roller coaster of the finest quality you don't want to miss. "Microorgasmen Im Morgentau" the b2 track on the vinyl is a cinematic soundtrack with a DJ twist Its much more intimate, personal and serious then the other two tracks. A moody journey of a track without being deep house or whatever is so fashionable these days. The track has a rather medieval quality something which has been said about Aphex Twin with his early " Coustic Window" tracks. The bonus track which comes only with the digital version of the release "Als Er Den Gleißenden Rand Seines Schattens Sah" is a piano track Dominik recorded while it was storming and rainy outside left alone with a candle, matches and twenty taxidermically prepared animals.