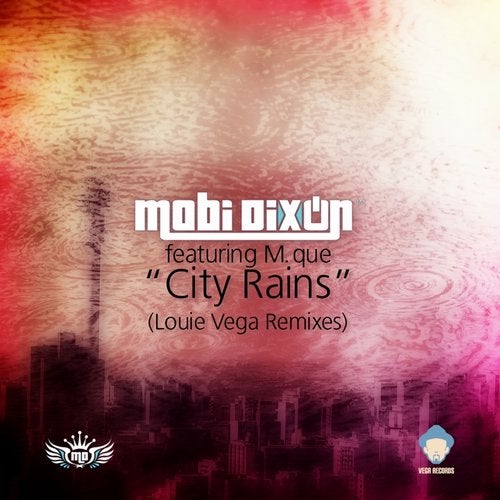 Its pouring. Wet is everywhere, but youve got the itch and you know just where the party is at. Your cab pulls up, you see familiar faces. You jet towards the entrance, say your hellos, handout some hugs and descend into an underground sonic abyss.

Boom. Boom. Clap. Clap. Youre exactly where you need to be.

The best music is capable of painting a mental picture of what environment best suits it. City Rains Louie Vega Remix is capable of that and more. The songs first sonic stroke is wiry space-like zooms and vrooms. Youre then greeted by classic Louie Vega house drums, they drive the music forward in a military-like cadence. The drum patterns are adorned with quick splashes of xylophonic percussion. The song erupts and comes alive. The aroma of the ingredients brewing in the underground cauldron consumes the dance floor. And front and center of all the action is the nights conductor, the Master of House Music himself, Louie Vega.

City Rains Louie Vega Remix is a collaboration between Vega and Mobi Dixon, a South African DJ and producer extraordinaire. Dixons original City Rains features vocalist, M.que, whose bluesy tales of urban migration paint a hopeful prospect for listeners as Dixon explains, The song talks about urban migration and how people come from small towns and farms to the city seeking success. They then get showered (rained) upon by blessings of the city and achieve greatness.

Dixons production arrangement is full of house music energy, which contrasts beautifully with the songs poetic tales of ambition. This contrast was interesting to Louie Vega and a driving force behind his decision to remix the song. Tension can be beautiful. Masterful creatives excel at molding tension to their liking.

You waltzed right in and you saw my pain
_______________________________
A guy was told
That in the city of gold
People would come saying this and that
Flapping their gums only to try
Only wanting for themselves
To untrained eyes and ears, these lyrics may seem misplaced in a dance music remix, but honesty in art is in fact, bravery. Vega accelerates the pace of artistic empowerment through his remix by creating an enjoyable sonic landscape that the poem can operate within. The more people enjoy this music, the more people will dissect the lyrics, the more empowerment the song can provide. This is a component of artistic responsibility- to say and promote what is top of mind, but seldom discussed. The struggle and path to success is often overlooked. This song paints a picture of hope and reminds listeners to embrace the journey. So the next time its pouring, think of rain as a showering of blessings instead of an elemental incovenience.
Be sure to pick up City Rains Louie Vega Remix on Vega Records and at all major digital retailers. Look out for vinyl too!

About Mobi Dixon:
Under his belt, this popular East London DJ holds a sound engineering diploma, two IT diplomas, music business and event management certificates. When the hip hop evolution started in East London in the late 1990s, Mobi was one of the youngest beat makers in the city. At some point, Mobi was also a rapper but the production side of things has always fascinated him, Production is my first love followed by djing, he says.
He went on to study in Johannesburg where his love for music became real, I would rub shoulders with big industry DJs like Christos and Fresh as a campus DJ. Seeing them living my dream made me believe it was possible for me as well.
In 2007, he started his own recording label. While still in Johannesburg, he realized there were not many Eastern Cape DJs making noise in the industry, I decided to come back and nurture unearthed talent in the Eastern Cape, he says.
My biggest moment was when City Rains went viral on social media then got louder than loud on radio with high rotation airplay. Im very happy to have Vega involved in the remix as it will give the original a completely new feel and vibe. Thats the magic of Louie, says Dixon.