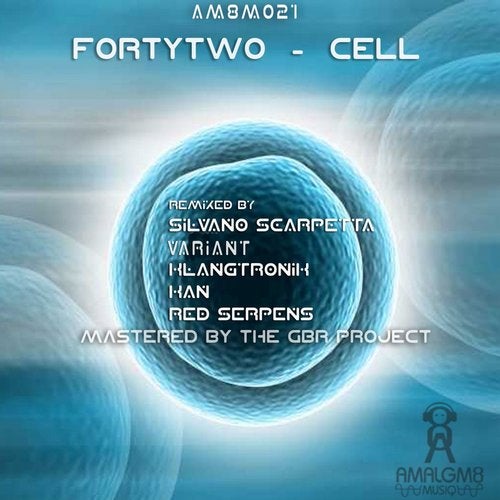 Amalgm8 Musiq is keen as mustard to present this release of epic proportions , hard to believe that this is his first full debut release as it bangs with a fervour, intelligence and swagger of a producer who has spent many more years in the studio perfecting his art. Enter Olli aka Fortytwo from Reute in Germany, and his rather large Fortytwo - Cell ep . The title track Cell is a brutally driving and technical techno behemoth that pulls no punches and will have hordes of partygoers regimentally stomping those dance floors hypnotically locked in the groove. Cell comes with another original track Bionical which is a deeper techno affair that would work well in those earlier sets, and .. wait for it, no less than 5 wickedly diverse and no less driving re interpretaions of Fortytwo's originals. On remix duty for this one are 2 of Germanys hottest and most prolific producers and dj's, Silvano Scarpetta , and Klangtronik. Silvano is the head honcho of YBooking, and one of Germanys most in demand techno djs and producers right now, so it is always a huge pleasure to welcome him back to Amalgm8 Musiq. Here Silvano delivers a wild driving track that pulsates with throbbing bass and clever percussive nuances, he presents a real on point banger with his remix and fortifies this ep to another level. Next up Is Klang Records boss Klangtronik and his version is one hell of a rework. excellent use of the original samples give this a truly biomechanical feel , the interestingly sparse percussion with solid and tight kick pattern gives this a truly standout drive and will instantly demand attention in those techno clubs. Next up is Red Serpens remix, which takes the tempo up a few notches with a head down straight to the point stompfest with crashing driving percussion that will get ya moving. We follow that up with Kan's remix which takes things in a deeper darker direction , this remix has a great organic live feel to it while still retaining plenty of dirt and the cybernetic elements of the original. We close this massive release with a heavy rework from Amalgm8 Musiq boss Variant who serves up a savage dark crunching remix full of menacing robots , mechanical stabs and fx , and the percussive make up of pure marching powder.