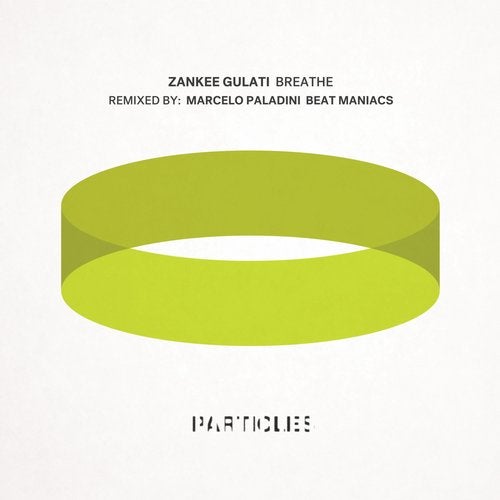 Welcoming new artists to the Particles family is always a pleasure and with Zankee Gulati, Australia continues the tradition. Including remixes from Marcelo Paladini and Beat Maniacs, we now "Breathe".

Initially from the Tasmanian capital, Zankee Gulati's move to the cosmopolitan Sydney saw an immediate impact on the city's underground dance scene with his seamless transitions and "deepest progressive house", playing alongside Guy J, Pig and Dan and Robert Babicz. A nascent production career has been born out of Gulati's DJ performances with original work in the shape of "Airborne" and "Jupiter" for Clinique and Soundteller in 2017 and 2018. Now debuting on Particles, "Breathe" is founded upon a mule-like kick that acts as a metronome for a beautiful sequence of flowing melodies to rise and fall in reverberated glory. In perfect synchronicity with offbeat percussion, pads swell and pan across the left-right spectrum while a hypnotic bassline keeps all in check. Partner track, "Lush" immediately delights with its coruscating arpeggios that fit tightly against strong beat and house rhythm. Building elegantly, a synth line emerges in freeform fashion, juxtaposed against metronomic cadence and machine-based sequences. The result is a glorious multi-layered piece.

Based in the Argentine city of Mar del Plata on the Atlantic coast, Marcelo Paladini has been a regular around the clubs of his home country with appearances alongside Guy Mantzur, Marc Poppcke and Juan Deminicis. As a student of fellow countryman, Flymars, Paladini's production technique quickly bore fruit with a commercial debut in mid-2011, going on to see 250 production credits for the likes of Balkan Connection, Soundteller and Agara and regularly supported by Hernan Cattaneo. Making his Particles debut, the Marcelo Paladini remix of "Breathe" retains the same languid groove and melodic flow as the original, while a new rhythmic cadence and textured pads create depth. Additional production material and Paladini's skill have thus created a subtle variation of "Breathe" that holds true to Gulati's work.

The Beat Maniacs duo have been delighting audiences in their Belgrade hometown for over a decade. Inspired to enter the production arena after attending parties and seeing the effect the music they played had on club-goers, a debut came in mid-2010 with "Spiral" on Quebolarecords. Going on to feature heavily for the likes of Balkan Connection, Stellar Fountain and Lowbit, Beat Maniacs have also been regular contributors to Particles since an early debut in 2014. Since then, August 2016's twin-track "Gravitas" was a notable high point, while March 2018's "Prophet" EP also saw remixes from Hot TuneiK and SEQU3L included. Reworking "Lush" the aptly titled "Beat Maniacs in the Rain Remix" sees a laid-back electronica offering full of white-noise washes that bear the hallmark of traffic passing by on rain-soaked streets. A stripped back affair, new melodic passages create an entirely new feel while freeform guitar riffs post-breakdown add an organic dimension in a remix of ingenuity and innovation.