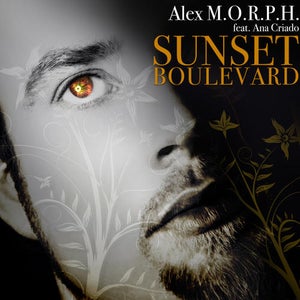 Trance is king. In terms of sheer popularity, there is no other genre of electronic dance music (EDM) more widely attended and listened to than trance. Germany's ALEX M.O.R.P.H. is a real flame-thrower of a DJ and an expert trance producer, arguably one of the latest reasons that trance remains king. Signed to PAUL VAN DYK's VANDIT label, the Berlin-based M.O.R.P.H. announces his partnership with trans-Atlantic boutique label, SEATOSUN | LOVERUSH DIGITAL, beginning with the release of the hit single, "SUNSET BOULEVARD," for North America and the UK on March 15, 2010.

Featuring heartbreaking vocals by ANA CRIADO, "SUNSET BOULEVARD" is characteristic of M.O.R.P.H.'s high-energy, uplifting, euphoric sound. With the heaviest of 4/4 beats thudding beneath a fluttering synth bassline, "SUNSET BOULEVARD" soars to the heavens with M.O.R.P.H.'s rapturous melody before building and crashing on cue. The "SUNSET BOULEVARD" EP from SeaToSun|Loverush Digital features remixes by PAUL VAN DYK, LOVERUSH UK!, STED-E & HYBRID HEIGHTS and others. Originally released by VANDIT as part of M.O.R.P.H.'s Purple Audio studio album, "SUNSET BOULEVARD" has taken on a life of its own under the guidance of SeaToSun|Loverush Digital. With tunes already championed by the likes of PAUL VAN DYK, ARMIN VAN BUUREN, TIESTO, MARKUS SCHULZ and FERRY CORSTEN, M.O.R.P.H. has an innate sense of the ebb-and-flow of a dancefloor, and his skills as a producer bleed into his command of the DJ booth. Having played clubs and supersized festivals including, Trance Energy, Gatecrasher Summer Soundsystem, Nature One, Cream Ibiza and VAN BUUREN's A State Of Trance 400, M.O.R.P.H. is as in-demand as ever.

M.O.R.P.H. (real name: Alexander Mieling) has over 100 remixes under his belt for VAN DYK, VAN BUUREN, SCHULZ, JOSH GABRIEL, ATB, FILO & PERI and FAITHLESS, notably including the latter's "Sun To Me" single, as well as a remix of VAN BUUREN's "Shivers." Most importantly, it's M.O.R.P.H.'s original productions that set him apart. Unforgettable M.O.R.P.H. productions consist of: "Maximum Overdrive," "Creatures," "Flaming Clouds," "Klangwelt," "New Harvest," and - a dancefloor annihilator with RANK 1 - "Life Less Ordinary." In 2009, VAN DYK was quoted in the UK's DJ Magazine naming M.O.R.P.H. as the "breakthrough producer of the year." To wit, VAN DYK's own In Between (VANDIT/Mute) album contains two original M.O.R.P.H. tunes, and he contributed additional production elsewhere on the album. M.O.R.P.H. regularly collaborates with production partner, WOODY VAN EYDEN, and it's M.O.R.P.H.'s willingness to explore new territory that makes him so attractive as a studio partner.