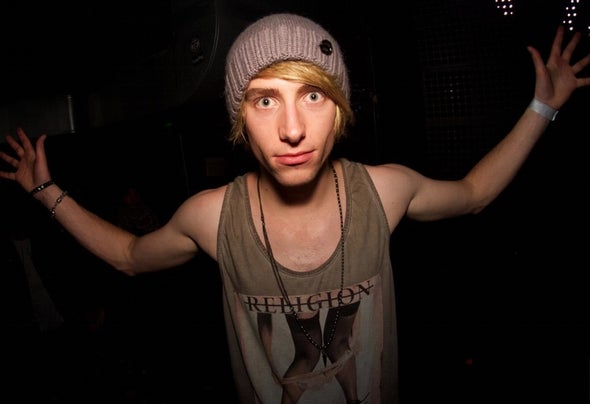 22 year-old producer Multiplier has quickly established himself in the dance music world. Real name Adam Pollard, he started producing in early 2011 and has already headlined shows internationally, alongside big names such as Calvertron. He has also attracted a significant social media following (8,500+ Facebook fans, 5,500+ SoundCloud followers, 120,000+ plays, 14,000+ downloads), and shows no sign of slowing down. He was first known for his moombahton and moombahcore productions, but now he takes influence from a range of genres (dubstep, electro, breaks, progressive), creating tracks and live shows that capture the imagination of those listening, refusing to conform to the rigidity of a narrow sub- genre." ... Multiplier has grabbed many elements of EDM and put it in one big blender, using the best of each of them ... "‘The Future of Moombahton 2012’ Moomba+“ ... Whatever the tempo, he manages to infuse energy and madness in these tracks for the sole purpose of catapulting the audience into another dimension ... ” Wipeout DubstepMultiplier’s first official release (a remix via High Chai Recordings) made the highly respected Beatport 'Secret Weapons' chart. His debut EP ‘STFU’ (on the same label) did very well too, also making its way onto the Beatport ‘Secret Weapons’ chart - twice - as well as reaching #5 in the Trackitdown dubstep chart and #10 in the breaks chart.He has then gone on to release originals on Straight Up! Music, Columns of Knowledge Recordings, Relentik Records, and Bit Rowdy Records. In addition to releases as Multiplier, Adam started his own label - Relentik Records - which launched in January 2013, and has already signed over 20 releases, covering all sides of the dance music spectrum, from heavy, aggressive dubstep, to more relaxed ambient works. He has received support from and played alongside influential DJs including: Electrixx, High Rankin, Calvertron, Crizzly, Nerd Rage, SaBBo, Kev Willow, and Essbeedee.