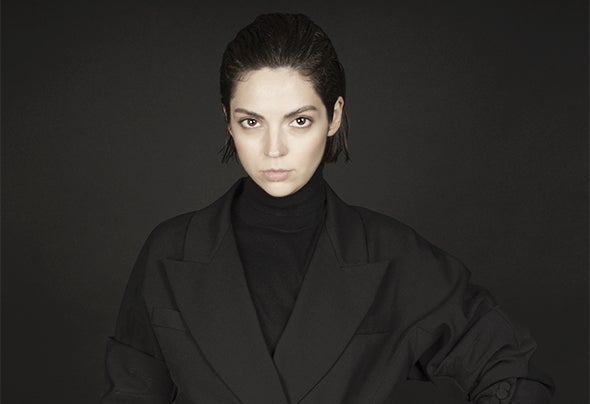 With her music she reflects the modern underground movement after midnight. You will feel the power of the sound of analog machines harmonically linked to the pleasant, danceable and hypnotic atmosphere with industrial rhythms. Julia Bondar is Ukrainian born, Barcelona based electronic music artist, singer, and songwriter. Debut album 'Blck Noir' was released in 2018 when she formed part of the duo Principal Uno together with Andreas Zhukovsky, where she sings and performs on modular synthesizers. In 2019 she continues as a solo artist under her real name Julia Bondar. Her partner Andreas Zhukovsky is continuing the participation in the project by creating and directing all music videos for Julia at 'Endorphin.es Production' studio. Alongside this, Julia releases her next electro, downtempo album 'In My Neighborhood' on Detroit Underground US label. In this album and its cover, she refers to the early memories from the childhood spent in Eastern Europe. In summer 2019 two singles 'Fleurs do Mal' and 'Dramatique Waters' with still minimal synth wave vibe were released with their music videos. In December 2019, the french label 'Unknown Pleasure records' reissued on CD her best electro tracks. In parallel with that, she works on the development of techno sound and in winter 2019 she publishes techno EP 'I Want Forbidden' containing 3 tracks and music video for 'Lust'. Julia Bondar is a live act performer, she takes on stage a whole her music, yet well-thought equipment to deliver raw power and unforgettable feeling from real electroacoustic instruments from stage to dancefloor.