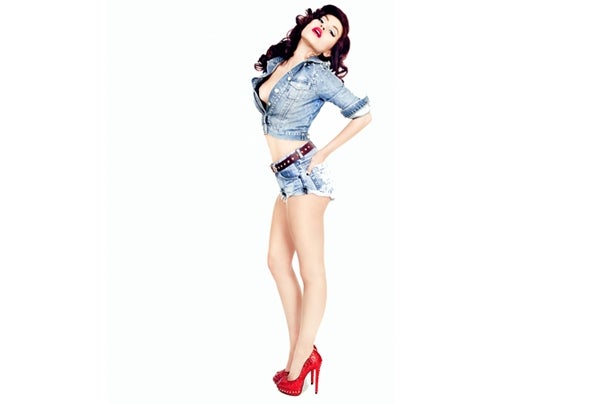 Guinevere is a dark pop diva with the soul of an admitted Star Trek, Star Wars fan and gaming geek, an expert Call of Duty player who often surprises her online male competitors when she reveals her true identity. Named after the legendary Lady of the Round Table, who stepped out on King Arthur for his best friend Sir Lancelot, the Toronto native also plays ice hockey and counts some of the NHL’s best as the biggest fans of her music.The 20-year-old singer-songwriter’s incredible live performances of her powerful pop songs, under her own Nuke Town Records—a nod to Call of Duty, naturally—shows off a unique ability to take the stage and make it her own, transforming from the self- described “shy, polite” girl next door into a larger- than-life pop icon—like Clark Kent rushing into a phone booth to turn into Superman, or woman as the case may be—mixing her beloved classic rock influence with the most up-to-date dance-floor beats. Guinevere possesses an undeniable star quality which transcends the music.This year Guinevere has had the pleasure of working with a choice team of top producers. Her first single, “Crazy Crazy,” was produced by Cirkut of Dr. Luke’s camp [Ke$ha, Britney, Rihanna, Katy Perry], while “I Don’t Believe in Love” was a collaboration with The Smeezington’s Ari Levine, Bruno Mars’ partner who helped co-write the hit songs “Grenade” and “The Lazy Song” as well as Cee Lo’s “Fuck You” and Bad Meets Evil’s “Lighters.” Guinevere has also rocked the studio with Illangelo [The Weeknd, Snoop Dogg], Arthur McArthur [Big Sean, Rick Ross, Drake], Pilzbury [Mia Martina, Alyssa Reid] and Brian West [K’Naan, Nelly Furtado].2012 proved to be a very successful year for Guinevere, having toured with Nick Carter across the east coast of America, signed a distribution and licensing deal with legendary music label Tommy Boy Entertainment, toured Europe, hit #16 on Billboard’s Dance Charts, and having played over 200 shows across all of the US. The year has been nothing short of amazing. “Touring encompasses and epitomizes, for me, what it is to be an artist. You live, breath and bleed your artistry when you are on the road. It helped cultivate who I was, and who I was striving to be.”Guinevere’s rendition of “Missed Calls” by hip-hop’s newest star Mac Miller, illustrates Guinevere’s depth as an artist. “I rewrote the lyrics and melody from ‘Missed Calls’ with Amir Epstein, leaving the chorus as it was. It was my interpretation of an already beautiful song, but from a woman’s perspective.” The video features Guinevere ‘s natural beauty, without the glamorous makeup and wild hair to which we have grown accustomed. Resonating far beyond expectation, the song was discovered by Mac Miller, and posted on his Facebook page, and his official website. The video was also posted on RyanSeacrest.com, and featured on E! News, receiving several celebrity tweets on its fresh perspective, as well as her undeniable beauty.The new single, ‘Fly Away’, produced by Cirkut, features her in-your-face attitude, world-class production and intricately crafted lyrics and melody, all which help tell a story of liberation. “I consider this a positive song, with a clear, strong message that you can break free. I think everyone has experienced being stuck in a bad relationship at some point in their life. I know I have. It’s that moment after you’ve decided to let go, and you feel a sense of joyous freedom – you can be yourself again. It’s not about an ending as much as about a new beginning.” Guinevere’s ‘Fly Away’ video will be released along with her single.Guinevere is looking forward to another banner year, being featured in upcoming Winter Music Conference, and a massive tour, including more European dates. Guinevere’s second single “Fly Away” is set to propel Guinevere into Pop stardom, and with her all-star team (aka Team Guinevere) Guinevere is headed for the stars! She will be featured on an upcoming iTunes App called Cupid’s Carnage (an anti Valentines day game), where the player is able to paste a photo of themselves and their ex boyfriend or girlfriend, and enjoy virtual revenge. “It is meant to be in good fun, and an entertaining way to relieve your anger towards those who have hurt you in the past, without ever causing any real harm.” The application is set to be released on Valentines day for all to play. “”2013 is going to be insane. I have so much on the go, and I am so lucky to have such an incredible team with the same vision and dream. I am ready to work harder then ever before, and make this a reality.” This is who she is, this is how she will do it, this is Guinevere.